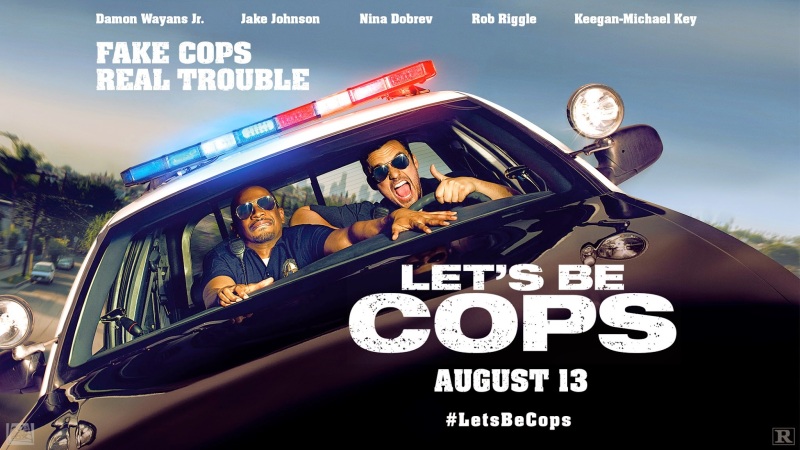 Ryan and Justin (Jake Johnson and Damon Wayans Jr from New Girl) are a pair of 30 year olds who after years of trying to find the right find out they hate everything. Ryan was dreaming to be an all-star football player, but got set back due to an injury and now coaches a group of kids, while Justin works at a games company where he fails to get his ideas heard.

They are invited to an alumni party, which they think is a costume party, but instead upon turning find out it’s not, and everyone they knew has grown up compared to themselves. Once the guys leave early they find out that the police uniforms they are wearing grant them amazing authority, something they never had in their day-to-day lives.

Queue an epic montage of cool badass walks, random police stops and then a mis-identification of them being strippers at a hen party. Eventually Ryan gets carried away and buys a full blown cop-car, tasers and even starts taking training videos online while ironing his uniform (at the end of the film I also looked up on eBay to see if you could by a cop car).

After responding to some real life police calls, they eventually get drawn into a police corruption investigation involving the local crime lord Mossi, and can’t trust any of the actual law enforcement.

Lets Be Cops made me laugh hysterically and was a massive surprise. I didn’t expect to enjoy it so much, and compared to other comedies that were a let down such as Anchorman 2, it’s great to see something fresh even if it is a slight adjustment on the 21 Jump Street formula. Yes some of the jokes will have you weirded out, such as the oddly touchy-feely lady in the stake out but overall the laughs are plenty! From the awful interrogation techniques to the robbery gone horribly wrong, and Justin having an obese naked man dragged across his face.