Luc Besson, famous for directing Leon and The Fifth Element, is back in the seat with Lucy, a film loaded with stars, questions and a great idea. Scarlett Johansson stars in the lead role as Lucy, a party animal student living in Taiwan who is tricked into being a drug mule for a Korean mob boss (played by Oldboy’s Choi Min-Sik).

While carrying the experimental blue drug in her belly, the bag bursts and is absorbed into her bloodstream. Cue an od’ing scene similar to something out of a possession movie as Lucy wobbles up and down the wall and all over the ceiling. This leads to her brain going into overdrive making it use more than the apparent 10% we all use (although I question this as there are loads of idiots on Geordie Shore).

As her brain develops she finds she needs the drug to keep her from literally destroying herself. To find out what also is happening with her she tries to meet up with Morgan Freeman who plays a scientist working on human evolution.

Scarlett plays the character of Lucy well, after starting off as a believable student turned drug mule, and eventually descending into a know-it-all emotionless being. To keep her grounded she partners up with Captain Del Rio, a French police officer who provides an interesting perception of what normal people would act like seeing a superhuman. 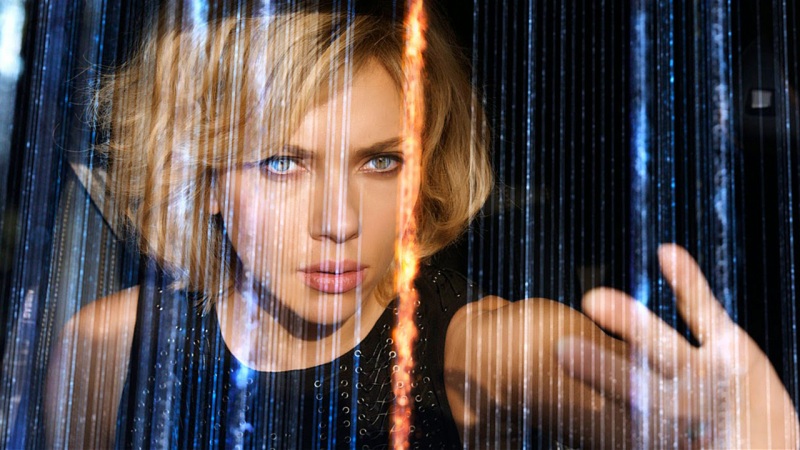 Luc Besson is running with an interesting idea that I feel gets off to a great start but due to the limitation of time, begins to rush through before it has a chance to really be fleshed out. Lucy’s final stage of evolution feels like it was originally a much larger idea, but is then ripped into a single message to make sure it fits in the remaining time.

The film also seems to be lacking in the action department. Personally I think some of the scenes where Lucy shows of her abilities could have been much better with better shoo out scenes and choreographed fights. I know she’s meant to be a super being, but so was Neo and he still threw his fists around.

Overall Lucy looks like it was meant to be an action flick with some philosophical questions, instead it’s a film that doesn’t know what it is and throws some ideas together to see what sticks, with an Asian power sliding on the floor with a rocket launcher.