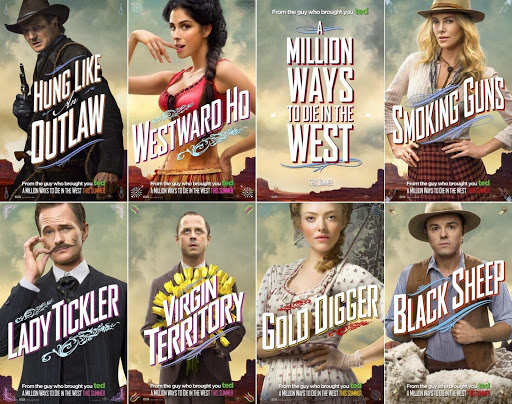 After the success of Ted, Million Ways to Die in the West is Seth Macfarlane’s follow up, but this time he puts himself in the main role. Whereas normally he voices a range of characters from a teddy bear to the Griffin Family, this time he is the lead character sharing the screen with Charlize Theron, who plays Anna.

Seth plays Albert, a sheep herder whose life turns upside down when his girlfriend Louise (Amanda Seyfried) breaks up with him. To win her back he decides to take on mustachio’d Foy played by Neil Patrick Harris, her new man. After a terrible start taking him on, Anna turns up and they strike up a friendship, where she trains him to shoot and woo his ex. As they build their friendship, Albert finds out he has moved on from Louise and is now falling for Anna. Things again go sideways when Anna’s husband turns up in town, played by Liam Neeson.

Throughout the film Seth Macfarlane uses witty and sarcastic dialogue for some great laughs, from the range of diseases in the wild west, to the racial tensions during the era. All these jokes work great with the scenes they placed in but that is the problem, they all seem like separate scenes rather than a film with a flow. Sometimes the film just drags where they attempt to flesh out the more serious parts of the plot, and the lack of dialogue from the great supporting cast feels like a waste.

Overall the film will be enjoyed by those who are used to Seth MacFarlane’s previous works, but for anyone else it may be difficult to digest his crass humour. The one thing I definitely approve of is the use of iconic moments in the film – from Neil Patrick Harris’ ‘Challenge Accepted’ to the appearance of Doc from Back to the Future.