Destiny is the next big game from Bungie, the infamous creators of Halo, and everyone’s wondering can they really pull away from Master Chief?

Destiny will be launching later this year on the new console formats as well as the old generations, except for all of Nintendo’s platforms. Right now the PS4 currently has an Alpha release for players to test out. Luckily I managed to get my hands on an invite.

Destiny combines the typical features of the Halo series with the massively multiplayer features of Borderlands. Players can create their own character from three base classes of Titan, Hunter and Warlock. These are essentially a soldier, stealth and wizard classes. Each of these classes comes with their own special power ups from ground smash for the Titan and a golden gun that shoots explosive rounds for the Hunter.

Once you pick a class you can customise your characters features from faces to races, genders and totally out random skin colours (neon blue anyone?). 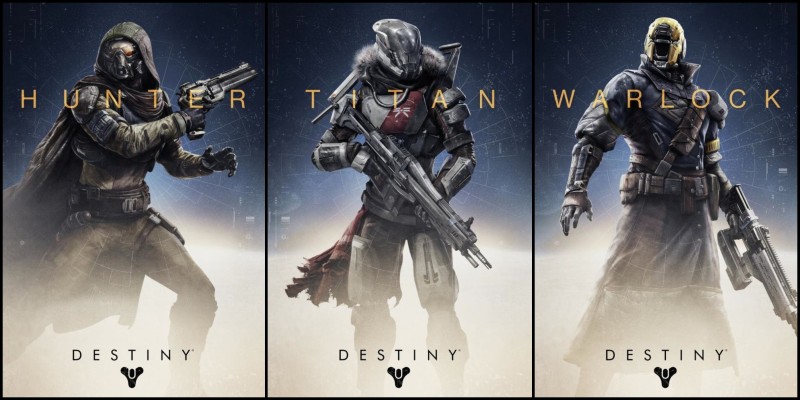 After that is all done you are thrown into Old Russia, a wasteland full of broken buildings and broke down vehicles.  Much like Cortana, you get a small aide in the shape of essentially a Rubik’s cube, who informs you that out are here to find out what the invading alien race called the Fallen are protecting. The first enemy I saw looked like a floating TV, so I didn’t attack it straight away until it decided to shoot. Much like other FPS games, players will feel right at home, once you aim and shoot players see how much damage they are inflicting on the enemy as well as a health bar.

As I opened fire more enemies came rushing in to help, and at first they looked very similar to the Elite’s from Halo, acting very similar with their duck and cover moves.  As they were quickly dispatched a ship flew overhead to drop off more enemies, again looking very similar to Halo. Even though Bungie are trying to do something very different, this could easily be confused as a Halo sequel to those who are not aware.

Weapons and the way the health regeneration works all show features of Halo so it seems although Bungie want to try something new, they are not going to forget Halo, although why should they not take features that worked well from past experiences.

As I made my way to the objective I ran into another player taking on a Fallen, although at first I though it was a robot considering how badly the player was shooting but eventually it was obvious it was not an A.I. considering they were picking up all my loot the thieving bastards! Eventually I got to the point where I thought they were more of an interference, so they were left behind. Destiny allows players to party up and take on challenges that would be difficult for single players, and explore the worlds secrets together, but thankfully its easy to bail on people should they be of less use than originally thought.

I soon got bored with the single player (I was roaming the same are for a while as there were multiple goals to complete) I figured I would give the multiplayer games a go. Right now only one is unlocked, which is capture the objective. In total there will be six modes it looks like but right none of the rest are available.

You can take the weapons you find in single player to the online world, which resulted in a lot of variations of players, but I couldn’t pick them up (unless I was missing something) so hopefully this feature will get added.  As you level up and play well online players are rewarded with new gear and weapons for single player, meaning spending time in both single player and multiplayer is worthwhile.

Overall Destiny is alright so far but I’m hoping it will get better as it nears the release date. It all just seems a bit too much like Halo and is yet to show any massively unique qualities.