There’s been various films of past musicians, from Ray starring Jamie Foxx, to Joaquin Phoenix playing Johnny Cash in Walk the Line, but none of them have ever caught my interest as Straight Outta Compton. I’ve grown up listening to rap music, but only caught the tail end of the hype.

Straight Outta Compton focuses is on the infamous Niggaz With Attitude (NWA), consisting of Eazy-E, Ice Cube, Dr Dre, MC Ren and DJ Yella. Eazy-E is initially the frontman with Ice Cube writing the lyrics, and Dr Dre dropping the beats. The group starts out on a high after they manage to independently release Boyz n the Hood. This gets them spotted by the sleazy producer Jerry Heller, who is now suing the film producers for defamation of character, and it’s easy to see why. Paul Giamatti plays the character well, while appearing to respect the groups creativity and talents, he tries to divide and conquer while maximising his money-making chances. The film essentially puts him front and centre as he uses his position to manipulate Eazy-E and gain whatever he can. At times though he does come across as their protector, such as when the police harass the group and he stands up for their rights, but apart from that he is generally hated.

As the film goes on we see how the group ends up losing trust in Heller, and rifts form between the members. Ice Cube is the first to leave, resulting in the remaining NWA recording a diss track, which sets off Ice Cube who leaves no one left untouched in his revenge track. While Heller demands that Ice Cube needs to be put in his place, Dr Dre decides to leave feeling that it’s no longer about the music. 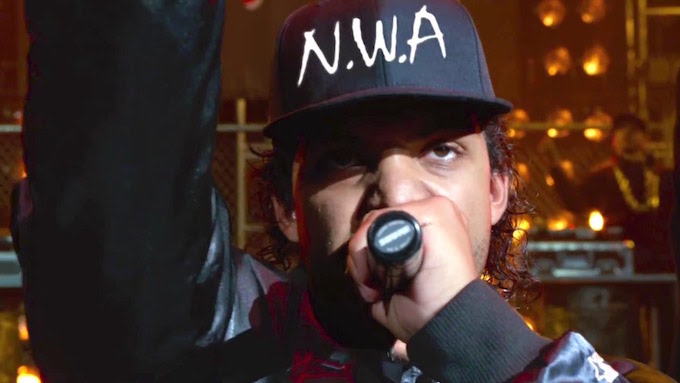 As we see the characters spiral out of control, we see some other famous rappers pop up like a Where’s Wally game, with Tupac and Snoop Dogg donning the red and white stripes. Eventually it all comes to a wrap (bad um tss!) with Eazy-E getting the news he has AIDS, and doesn’t have much time to live. Overall Straight Outta Compton will only be for the fans, everyone else will see this as an average film about some rappers living it large and then losing it all. It seems to skim over the violence which influenced the music, the fights between the various labels, and the change in character as the artists go from rap revolutionists to family men.