He’s fought kidnappers in Mexico, held hostages in a hospital as well as a heroin kingpin in Manhattan, so for this one Denzel Washington figured he might as well play Macaulay Culkin in Home Alone.

The Equalizer is based on the American crime drama of the same name that aired in 1985. It originally starred Edward Woodward, who helped people in hopeless circumstances when they had no one lese left to turn to. 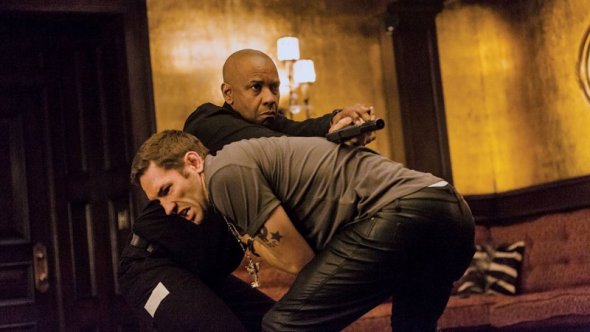 Fast-forward to the present, and now Robert McCall (Denzel) is an ordinary guy who works at DIY store enjoying the quiet life reading books and spending his afternoons in a diner alone. After a while a girl name Teri (Chloë Grace Moretz) begins chatting to him every night till one day she turns up battered and bruised.

Eventually she ends up in the hospital, at which point Denzel decides to step in. It’s at this point he goes from regular shmuck to badass assassin who doesn’t want to take shit from anyone. Queue violent fight scenes the Russian mafia, bent cops and general riff raff.

The Equalizer is a back to basics old school action flick similar to Die Hard, Rambo and the Terminator. It’s got a simple plot about a man handing out justice and none of the over the top CGI. Instead it’s got the classic action hero walking away from explosions, plenty of slow-mo scenes as well as the over the top violence (he kills a guy with a nail gun!).

Denzel plays the part well but don’t expect a Training Day quality performance, and his rival Teddy (Marton Csokas) is a worthy opponent who really puts his character to the test. The Equalizer is a fun film to watch that doesn’t require any over thinking, but instead provides brainless entertainment.