Since I can’t be bothered to type the entire name I’m just going to call it MGR. It’s a spin off of the Metal Gear series, and takes place after Guns of the Patriots. Raiden is the sword wielding ninja players control, although he seems less of a douche compared to his previous encounters.

The antagonists of the game are Desperado Enterprises, a private military company who kill the president Raiden is protecting, and later on, are involved in the creation of cyborg child soldiers. They consist of Sundowner, the leader with a massive set of swords that can attach to his arms and form a vice, Mistral, a female cyborg with a load of arms like a French Shiva, Monsoon and Samuel Rodriguez. Samuel is the guy who makes Raiden question his motives and also severs him into pieces early on.

If you’ve played games like Ninja Gaiden and Devil May Cry before, MGR is pretty much the same but in the Metal Gear universe. This game is all about the hack n slash though so long range weapons are fairly limited. You get the occasional RPG and surface to air missile to take down choppers, but the swordplay is where its at. Players need to string together as big as a combo as possible to get the biggest rewards, as well as chopping bad guys into as many pieces as possible. Once an enemy is ready to be chopped, a separable limb will turn blue indicating its time to perform surgery. This can slow down enemies reducing their effectiveness, letting you finish them off easily. Once they turn fully blue is when the gore comes through! Either press a button to swipe horizontally or vertically, or freestyle it with an analogue stick to choose which way to cut.

The great thing about MGR, is how over the top it can be. I loved Devil May Cry when you used to run down buildings, jump from high roof tops, and hop about like you were a complete bad ass, this seemed lacking from the previous couple of instalments. In MGR it happens every five minutes, and you seriously start believing Raiden is an ultimate bad ass, add in the fact you chop the shit out of a Metal Gear Ray. 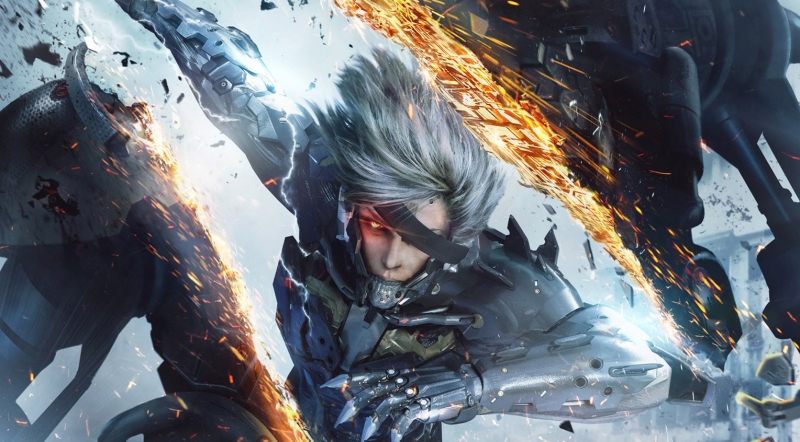 As with the previous editions of Metal Gear, the graphics are awesome, scenery is detailed, vast and destructive. If you’re bored just walk up to a car or box and chop away. Its like that level in Street Fighter where you have to smash the car up! As well as being a serious game about war and its effects, there are other funny bits, for example Raiden quips about losing his arm all over again, plus in old Metal Gear fashion, players can run about hidden in a cardboard box.

MGR is a fun spin off that takes all the qualities of the original series and puts a Devil May Cry spin on it. Enemies are big, Raiden’s moves are chaotic, and the violence is greatly exaggerated. Anyone scared of blood and body parts flying through the air should stay away!