Bit of a weird day today. I was on my way to work, usual day so far, a snickers in my pocket and a bottle of orange juice in my hand. Suddenly I just see a line of busses, and they weren’t you’re average red and blur Go North East stuff, these were retro, the kind you would expect to see in an old british comedy.

There were double deckers, singles, and really small vans, and then a classic MG thrown in for good measure. Check em out below! 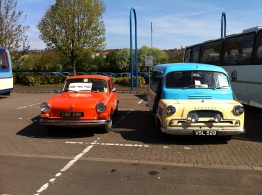